A few weeks ago I found myself on a Eurostar desperately trying to trick my 3G connections into loading a video of a band I’d never heard of. Needless to say, I was pleasantly surprised at the first link… They had just been on Letterman!

I was on my way to Paris for The Independent on Sunday, to shoot “the next big thing” an American band called Edward Sharpe and The Magnetic Zero’s, a massive 11 piece folk group who are really big across the pond. They were performing at the Rock on the Seine festival in the French capital and I had a backstage pass to shoot them before they continued on their tour.

Dusting off my GCSE level French it took me two hours to negotiate my way past security, then trek across a massive swamp ridden site before I arrived at their stage, just in time for their sound check. It was all a bit fraught, but I’d never been down the whole – I want to be a music photographer route and just put it down to rock and roll exuberance.

Like a hunter stalking prey, I looked for a band member to ingratiate myself with and managed to find a shy trumpet player called Stuart with a love for photography. It was he who turned out to be my “in”. 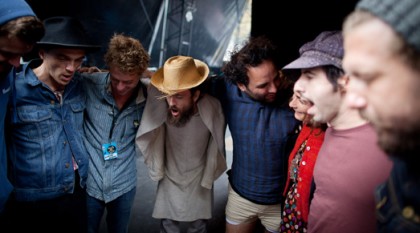 Just as they were about to come on stage they had a group huddle, and it was my newfound friend Stuart who invited me to join in, amongst some harmonised, tantric humming I took my chance and snapped away. 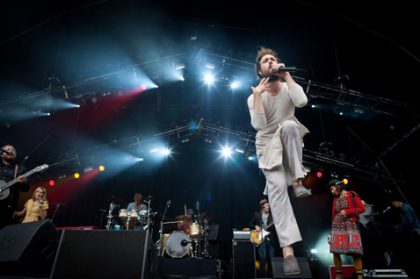 All went well during the gig, I’ve done a few of these before and after a few songs, I decided that I had it nailed and I slipped backstage to wait for them to come off. 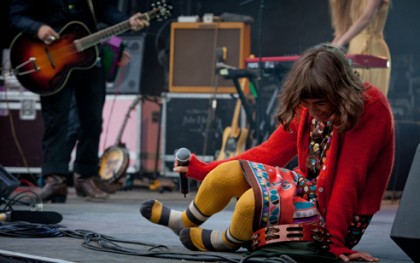 The next plan was to shoot a nice big group portrait, I’d scouted an autumnal corridor of trees but the problem was getting them there. After the show they scattered like the leaves in my would-be picture, so I had to make myself content with shooting Alex, the lead singer. 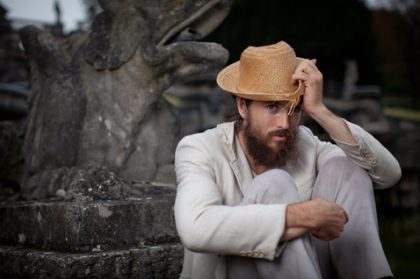 He turned out to be a nice guy and we chatted about where to go in Montmartre, while I put together a decent set of pictures of him.

The piece was used really well in the paper (Read it here). I’ve already bought a couple of their CD’s. I passed one of them to a friend, like one of those enlightened mortals who know what’s cool, the other one is in my CD player and they are great so it might be for some time.